Muhammad Yunus is Grameen founder . He was born on 28th June, 1940 in the village of Bathua , Chittagong, the business centre of what was then Eastern Bengal. He was the 3rd of 14 children of whom five died in infancy. His father was a successful goldsmith  . He always encouraged his sons to seek higher education. But his biggest influence was Sufia Khatun – his mother ,  who always helped the poor people that knocked on their door. This inspired him to commit himself to eradication of poverty. His early childhood years were spent in the village. His family moved to the city of Chittagong, where his father had the jewelery business in 1947 . 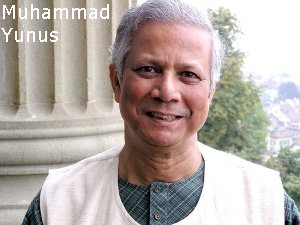 In 1974, Professor Muhammad Yunus, a Bangladeshi economist from Chittagong University, led his students on a field trip to a poor village. They interviewed a woman who made bamboo stools, and knew that she had to borrow the equivalent of 15p to buy raw bamboo for each stool made. After repaying the middleman, sometimes at rates as high as 10% a week, she was left with a penny profit margin. Had she been able to borrow at more advantageous rates, she would have been able to amass an economic cushion and raise herself above subsistence level.

Realizing that there must be something terribly wrong with the economics he was teaching, Yunus took matters into his own hands, and from his own pocket lent the equivalent of ? 17 to 42 basket-weavers. He found that it was possible with this tiny amount not only to help them survive, but also to create the spark of personal initiative and enterprise necessary to pull themselves out of poverty.

Against the advice of banks and government, Yunus carried on giving out ‘micro-loans’, and in 1983 formed the Grameen Bank, meaning ‘village bank’ founded on principles of trust and solidarity. In Bangladesh today, Grameen has 2,564 branches, with 19,800 staff serving 8.29 million borrowers in 81,367 villages. On any working day Grameen collects an average of $1.5 million in weekly installments. Of the borrowers, 97% are women and over 97% of the loans are paid back, a recovery rate higher than any other banking system. Grameen methods are applied in projects in 58 countries, including the US, Canada, France, The Netherlands and Norway.