The Norwegian Nobel Committee has decided to award the Nobel Peace Prize for 2006, divided into two equal parts, to Muhammad Yunus and Grameen Bank for their efforts to create economic and social development from below. Lasting peace can not be achieved unless large population groups find ways in which to break out of poverty. Micro-credit is one such means. Development from below also serves to advance democracy and human rights. 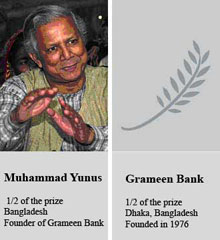 Muhammad Yunus has shown himself to be a leader who has managed to translate visions into practical action for the benefit of millions of people, not only in Bangladesh, but also in many other countries. Loans to poor people without any financial security had appeared to be an impossible idea. From modest beginnings three decades ago, Yunus has, first and foremost through Grameen Bank, developed micro-credit into an ever more important instrument in the struggle against poverty. Grameen Bank has been a source of ideas and models for the many institutions in the field of micro-credit that have sprung up around the world.

Every single individual on earth has both the potential and the right to live a decent life. Across cultures and civilizations, Yunus and Grameen Bank have shown that even the poorest of the poor can work to bring about their own development.

Micro-credit has proved to be an important liberating force in societies where women in particular have to struggle against repressive social and economic conditions. Economic growth and political democracy can not achieve their full potential unless the female half of humanity participates on an equal footing with the male.

Yunus’s long-term vision is to eliminate poverty in the world. That vision can not be realised by means of micro-credit alone. But Muhammad Yunus and Grameen Bank have shown that, in the continuing efforts to achieve it, micro-credit must play a major part.